I had no idea what twists and turns my life would take and wouldn’t change much because despite the bad.  I have a beautiful life. Looking back on these old photos I thought of some advice I wish I knew then. Things that troubled me through life; ADD, sexual assault, depression, cancer battles, giving up on a healthy lifestyle, even being shamed for being a stay at home mom. Now that I am older I realize they empowered me.

It’s okay to have ADD. Though I never knew I had it until adulthood, I managed quite well, but was often teased. My school years were tough as I was completely bored and just didn’t care about schoolwork. My parents had raised my older sisters and traveled the world when I hit middle and high school. My mom asked how I got work done never bringing a book home. I just didn’t care. I rarely ever turned in homework, did projects or even listened in class. I loved to read, but books I chose, not ones assigned. Many times I daydreamed, painted my nails, or ate icing out of a can from my big purse during class. I passed classes because I usually did well on tests without studying. As I progressed in high school years it got harder to maintain B’s and C’s without work but I managed to pass by the skin of my teeth. I had no intentions of going to college and never regretted it. I learned quickly and easily if I had an interest. At 17 I was hired on with Lancôme cosmetics. After graduation I managed their counter in a department store. A year later I met the man that became my husband and decided I wanted to move to Ft. Lauderdale with him. My Lancôme area Representative begged me not to go. She told me the company was breaking up the territories. She would have GA since Atlanta had grown, and I was the choice to take over the Carolinas. Love won, but it was then that I knew I could achieve anything if I put forth my passion.  I then became an Esthetician and made good money until I had kids. There was nothing more important to me than to be a stay at home mom.

It’s okay to be a stay at home mom. I’ll never forget the looks and opinions of other women when I would say I stayed home with my kids. It was like I was a shame to women everywhere. I let it bother me when should have been proud. I was called lazy and many other things. Staying at home raising your children is not an easy or lazy task. I had a great playgroup when they were young. Most of us met at Gymboree or dance classes, soccer, baseball or other organizations. We would have kids free ladies nights, because being a stay at home mom you don’t get much kid free time. As they started school I was room mom, worked in the classrooms, always a field trip mom, and volunteered in general. As the kids grew older I saw they both had ADD, my daughter not so much as my son. I brought him to a “specialist” who said he didn’t have it because he was able to concentrate on playing with a toy train the whole hour we talked. I later learned this guy was an idiot because my son didn’t have the hyperactivity that is usually associated with ADD. I didn’t want him drugged anyway. He had the same lack of interest and boredom I had in school. I and his teachers could see his brilliance, I just couldn’t motivate him. No one could have motivated me either.

By the time they were young teens we had sent their pictures to Ford Modeling Agency in Miami Beach. They were both accepted in the junior modeling. They had a photo shoots and comp cards made at Fords expense. We were getting calls to drive to South Beach so much Meg asked to be home schooled. She wasn’t far into the 8th grade. All I could think is, “me home school them?” This could not go well! I found out Florida had an online home school program and ended up to be a Godsend. I pulled both my kids out of school and with the online school we could come and go as we pleased. Zack decided he didn’t want to model anymore even though the adult male agent was begging to represent him. She thought he could do big things. My daughter went on to be represented by the adult women’s agent. We traveled last minute calls 3 hours to Miami and 3 hours back a couple times a week. I have to say I will never regret those trips. Many times we got trendy hotel rooms if she had a few days of interviews. She grew tired of the constant pressure and decided to focus on life.

My son had been taking electives at the high school along with Virtual school, she did the same. They did so well with this set up they graduated with high grades. My son was accepted into Embry-Riddle Aeronautical University. The recruiter talked to him about working with drones since he has amazing hand eye coordination. Though, after a semester he decided it wasn’t what he wanted. He taught himself to build high speed gaming computers and has built them for friends and family. My daughter graduated with a 2 year degree in business, but decided not to take it further. She started a family and she and her significant other have their own business from home. They are YouTube personalities and more. I cannot believe the money they make and things just keep growing for them as they expand into other directions.

Looking back, ADD has not stopped us and I beg anyone struggling with it, or parent that has a child struggling, find a different way to learn than a boring classroom! You can have high intelligence and still struggle until you find the best way for you to learn. Never be ashamed.

You will survive and get past sexual assault. I’m not going into detail because this is just too personal for me. I kicked, hit, scratched, screamed and fought. Though every sexual assault and rape are different, this is how I got away. It followed me for years. It was a secret until one day when my husband (before we married) and I were play wrestling and flipped out. I had to explain. It felt good to tell someone. I kept it secret to everyone else until just a few years ago. I’m past it but had nightmares for years after. I was only 14.

Eat healthy and exercise. This advice I would give my young self, and anyone else is to keep you body strong. I don’t know what caused my cancer when I was 31 and not sure what I could’ve done to prevent it. What I do know is eating healthy and exercise would help keep my body ready for the future battles. After surviving the first time I really got into eating right and was on my step machine every day. When I was diagnosed a second time the battle was much harder and I got lazy. The steroids in my chemo packed on 50 lbs. I’ve lost half of that, but became depressed and stopped taking care of myself. If I had stayed fit, my third battle 10 years later wouldn’t have had me guessing if I would survive it. Again steroids packed on pounds. I was so weak when I went in for my last treatment. My body has not recovered and my depression has gone deeper. Now I have an autoimmune thyroid disease on top of treatments every 3 weeks to keep my cancer dormant. It’s not too late for me to strengthen my body for what life throws at me again, but I wish I had never stopped taking care of myself. Keep your body strong! You never know what tomorrow brings.

Being creative has helped me through dark times. Finding the right medication helped tremendously. I fought taking medication for years. I wish I hadn’t. This is the one thing I would do differently. Depression is not shameful. There are people who are just down on life, down on everything. Nothing can make them happy until they choose it for themselves. If you have depression there is a chemical imbalance in your body that the right medication can help. Never stop a medication on your own. I stopped and started many times and messed myself up. Find someone to talk to and most of all love yourself. 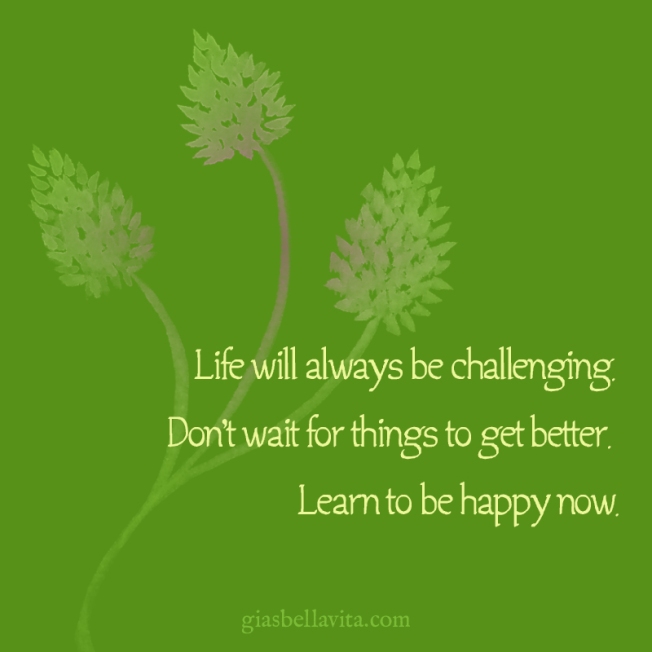 Life will always be challenging. Don’t wait for things to get better. Learn to be happy now. 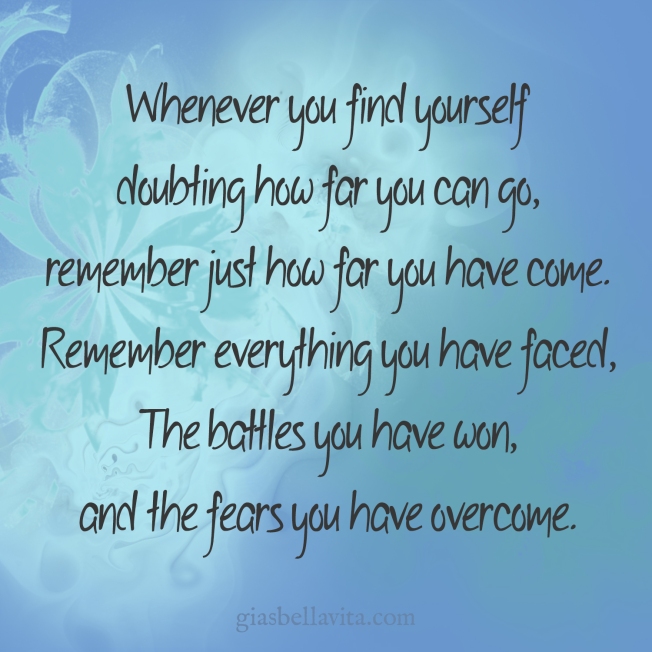 Whenever you find yourself doubting how far you can go, remember just how far you have come. Remember everything you have faces, the battles you have won, and the fears you have overcome.

4 thoughts on “Advice to the young me”